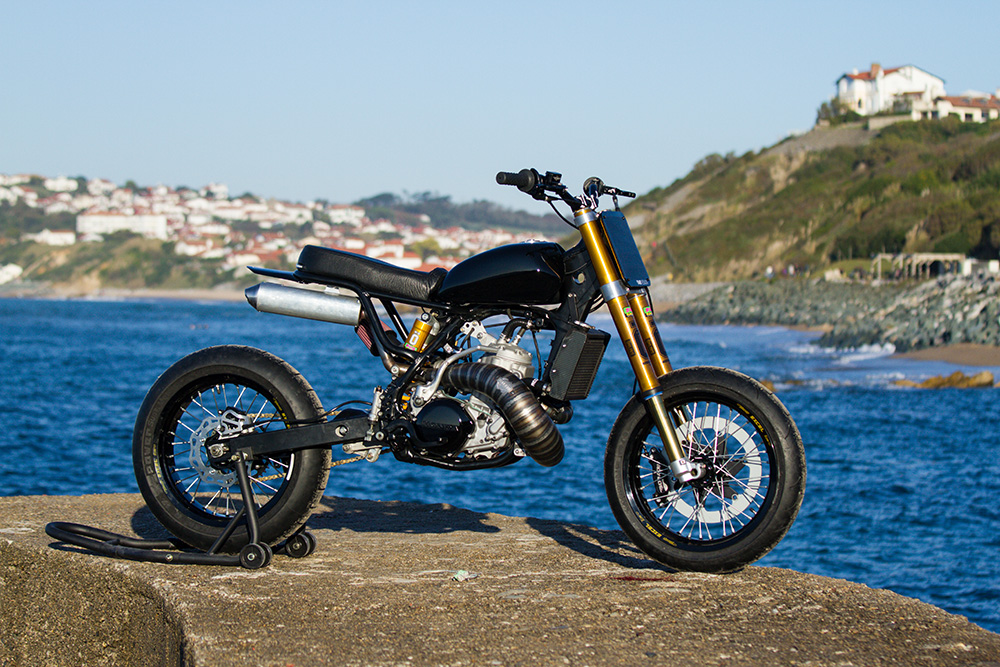 We have seen his builds before on Supermoto Central but this one is the best one yet. Simon Dabadie from Dab Design explains the process and details of his latest build #LM5.

At the beginning of 2016, I decided to start an internal project called «LM#0» which was building the first full Dab Design build which catch a lot of attention at its official release during Wheels and Waves 2016. After the success of this prototype, I have launched a very limited edition based on the LM#0 design : each model is configured in 3D before manufacturing with our clients and then we take care of convert this 3D into a real bike. 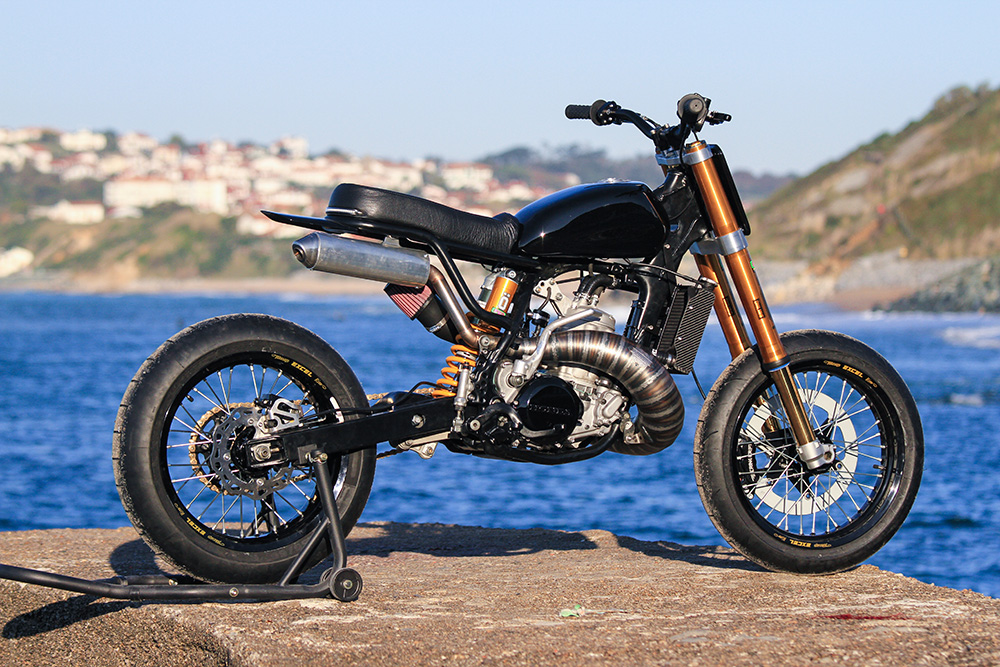 The end of 2017 will mark the closing of the LM by Dab Design limited edition. This year was very busy for the brand that has been building bikes for its customers. 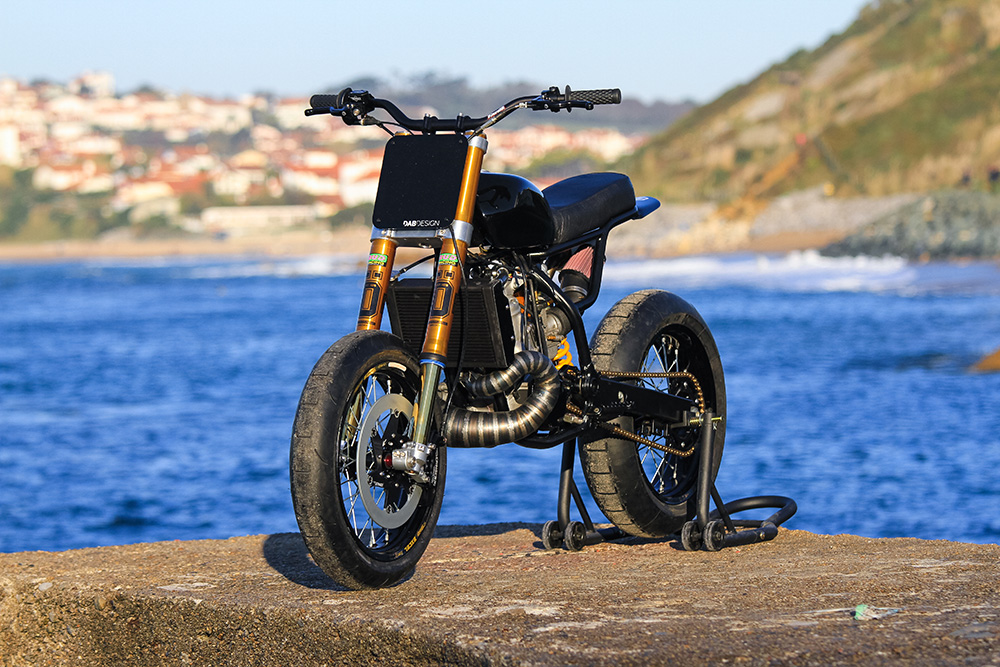 To mark the occasion, I wanted to make a special model for the 1 year anniversary of the limited edition by presenting an extreme bike. The public is used to seeing the Dab Design builds based on the solid Honda NX 650 Dominator well-known for its robustness, good performance and simplicity. 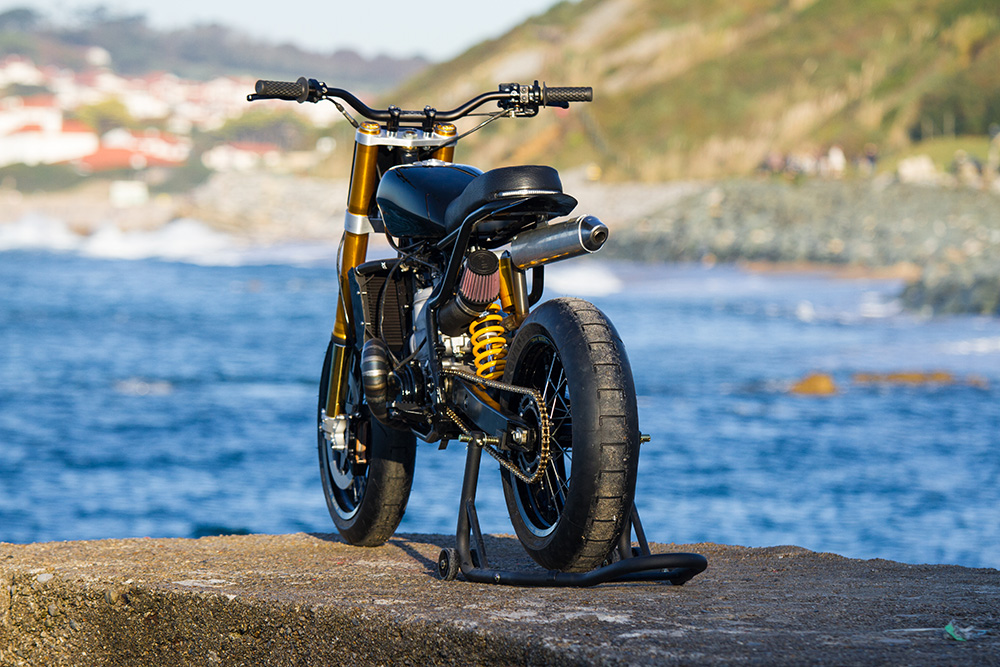 The LM#5 is placed above all the previous LM, using as basis the indomitable CR500 ... To which is added an element that makes it even more mythical : its name DIAPASON", one of the rare 360 CR500 homologated by the French dealer Diapason between 1994 and 1998. It’s during a customer meeting that I discovered, in the back of his garage, this wonder. Passionate about enduro, track and speed sports in general, Dab Design has created a real wheelie machine. 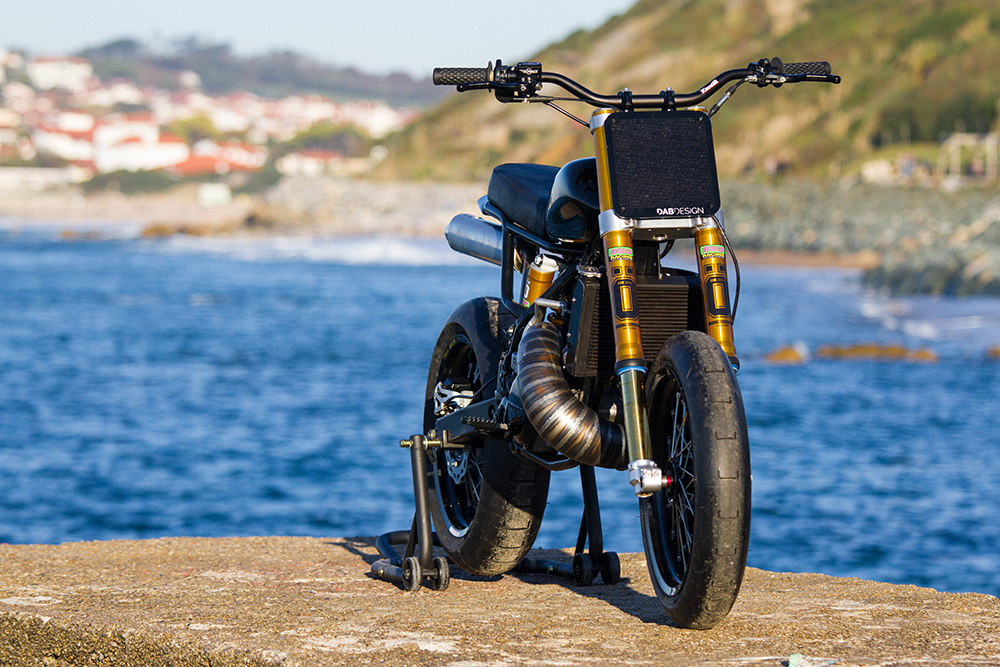 The configuration of the LM#5 has been set with my client from the beginning, after 3 or 4 different 3D rendering, the choice is focused on a dominant black coupled with high quality components.

The entire bodywork still uses the same molds of the limited series, designed and printed in 3D to mold the body using fiberglass, carbon or even flax fiber.

I make no compromises on manufacturing quality by working with a team of carefully selected craftsmen to rebuild the engine, weld and paint my bikes. 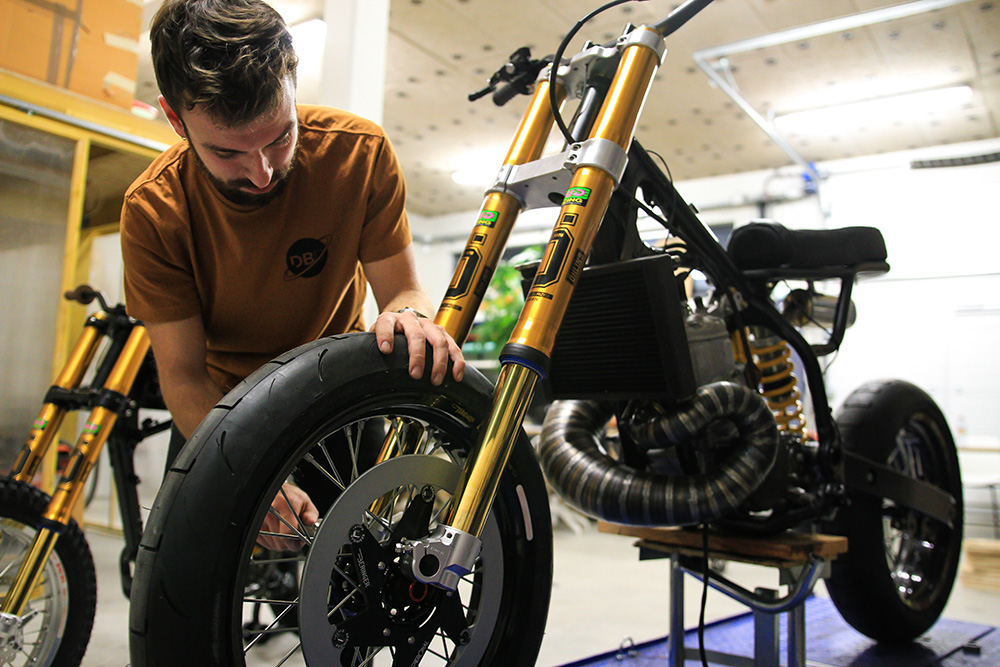 It's been several months I worked with a big name of motocross industry and this name makes react any crossman or endurist : Bud Racing. International reference in suspensions, I chose to work with the super team of Bud who made the preparation of the Ohlins suspensions of the LM#5, by  taking into account the characteristics of the driver (weight, size,type of driving). 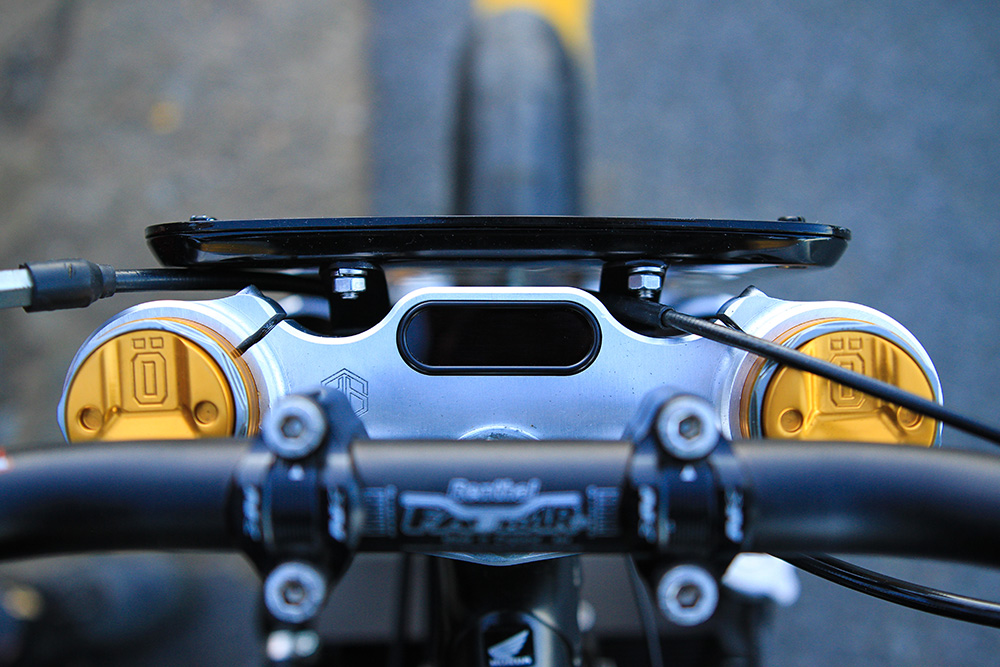 To adapt the tubes, I designed triple-trees on Solidworks (3D design software) and then sent to machining. These two aluminum pieces create a superb contrast with the golden suspensions. Note also the Motogadget multifunction speedometer inside the upper triple-tree, on which the driver can play with the information displayed by pressing a button on the Motogadget commands. 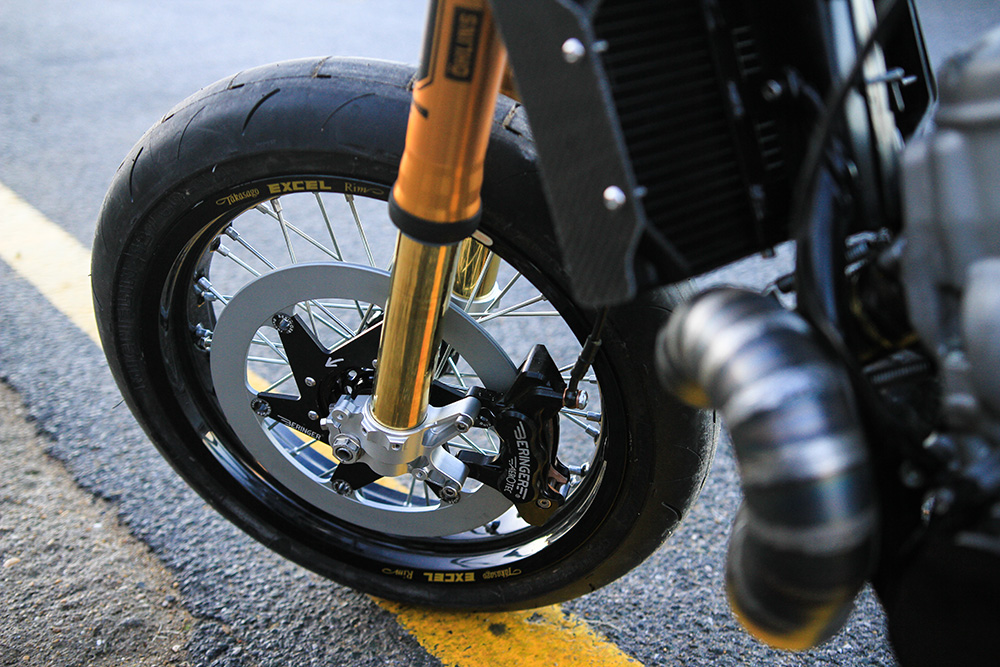 A weight of 100 kg, a power of 65 horses, it is quickly deduced that the braking system will have to be super efficient, same for the wheels mounted on the LM#5. To stick to the ground, Excel Tagasako rims are fitted with Michelin PowerSport tires of 160 at the rear and 120 at the front. And finally, the CR500 is equipped with the complete Beringer braking system offering incredible braking performance. 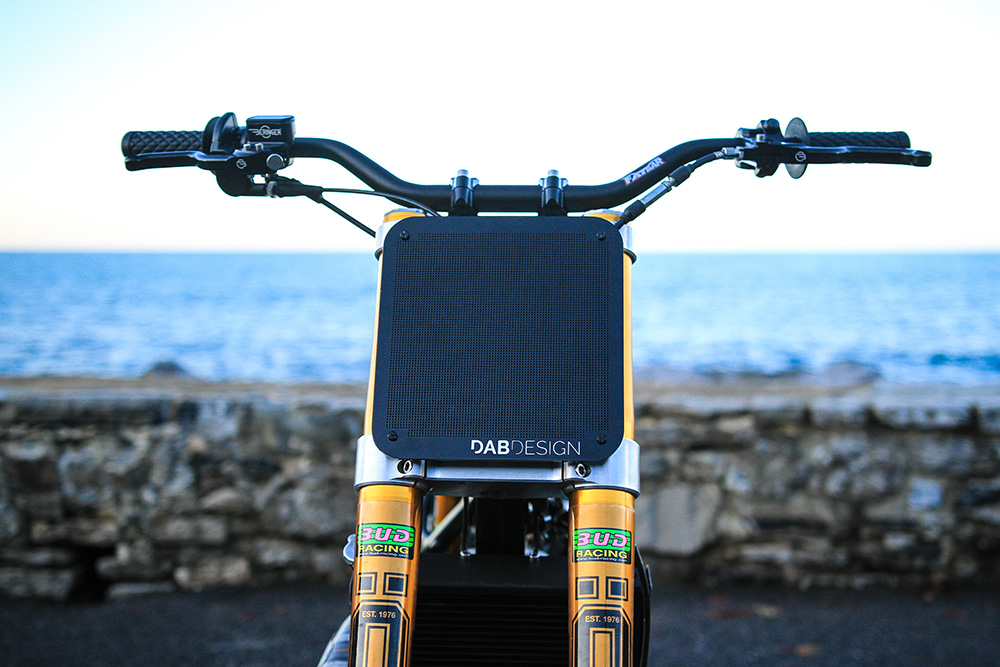 The Dab Design futuristic front-plate integrating the LED system is still there, as my signature. The plate was laser perforated and then painted in the same glossy black as the rest of the bodywork. The choice of black was also important to get the darkest black, so we choose the Vivid Black from Harley Davidson. 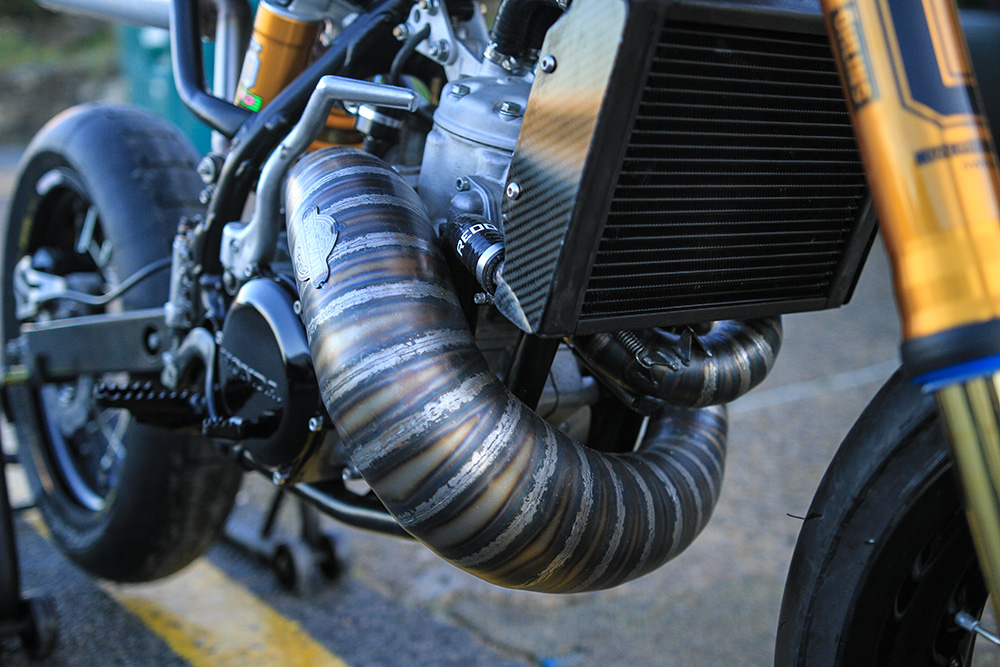 And now, let’s go to the heart of the bike: the two-stroke liquid-cooled single cylinder has been completely rebuilt. The cooling system was modified because the two original radiators did not allow to mount the tank Dab Design. I designed a central radiator and carefully payed attention to its volume and number of cooling cells to cool the 2-stroke engine. 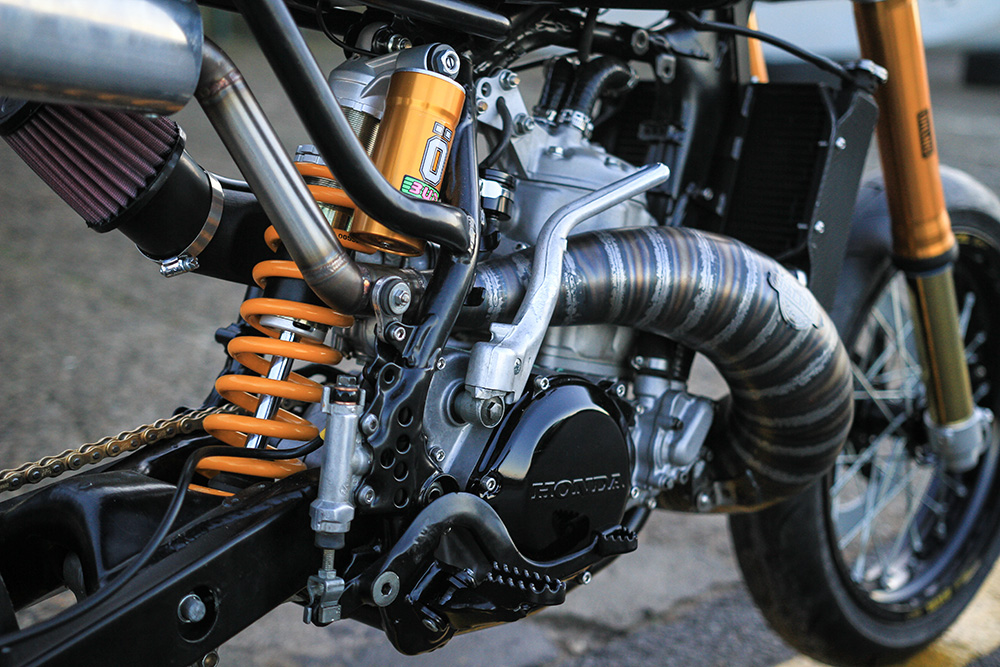 Below, we can see something similar to a boa, wrapping around the big 500cc like a snake. The Scalvini handmade exhaut boosts the Honda engine, and joins a FMF silencer placed on the side of the saddle. We can note the work done on the Ohlins rear shock absorber :it is the second central element of the bike, observing well, the frame and the exhaust surround him with perfect adjustments. 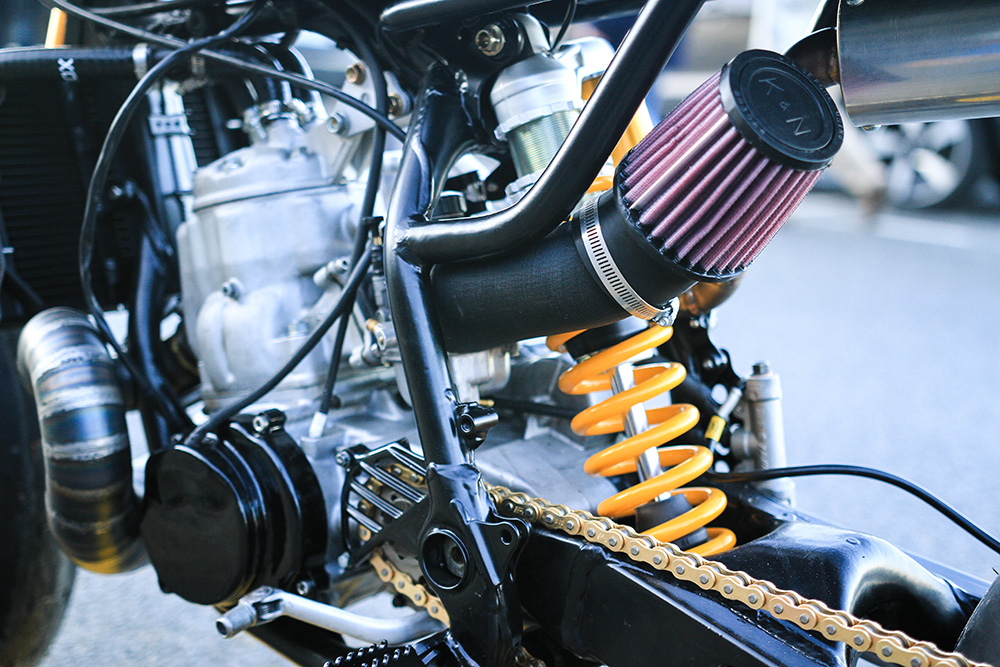 The original air box has been removed for space reasons, we had to also think about the location of the KN air filter. It can not be mounted directly on the carburetor because of the space taken by the rear shock-absorber, so I scanned in 3D the bike and then draw a specific 3D printed that comes "avoid" the shock absorber shape. 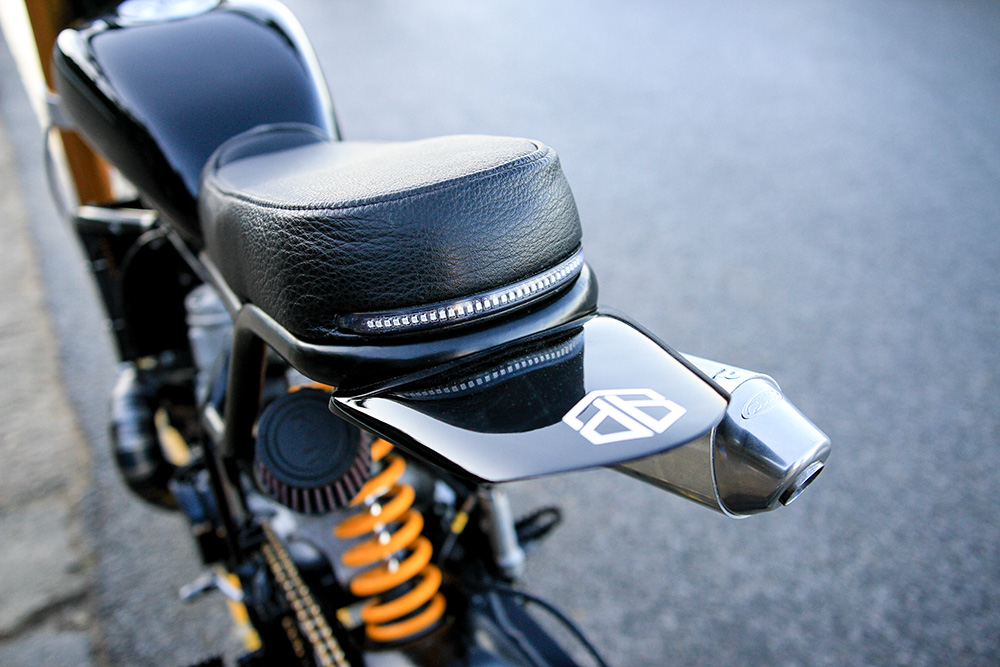 Finally, an important element is the saddle. For the LM # 5, I went to see the prestigious Carriat tannery that supplies the luxury brand Hermes and also Bugatti for the interior of the Veyron. So I went to Espelette to choose the magnificent buffalo leather that lines the saddle of the LM # 5.

Full black composite (fiberglass for this one) bodywork designed by