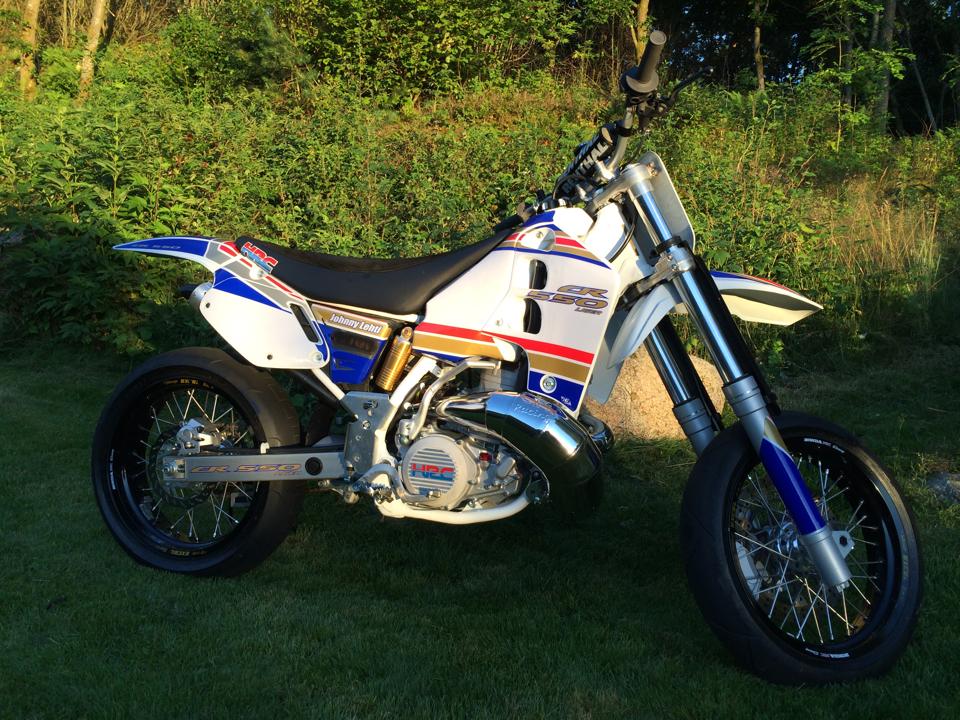 Ok, my name is Johnny Lehti. i am 49 years old. I live in the southwest of Sweden close to the sea. I work with Gym and fitness and run my own fitness center together with a friend. I have Always been intrested of fast cars and bikes and also have a Ford Sierra Cosworth with around 450 hp. I rode Enduro as a young guy and a few years back i took up the motorcycle riding, starting with Enduro again, riding a Husky WR300 2012 model with my son who has a similar bike. In the winter we started to do some ice racing together with some friends and that's were i felt i wanted a bike with more power that also could be Supermoto converted for some street and a little track use. Then it all went out of hand, haha! The power and torque of a well tuned CR500 is hard to beat but i found a solution for that :). 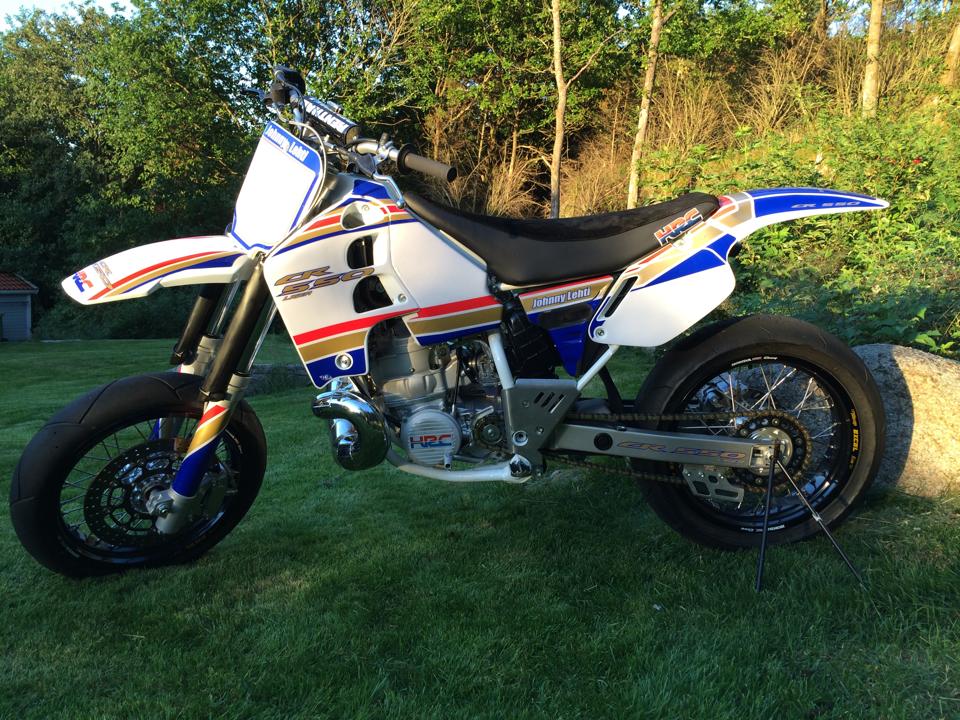 I haven't tried Supermoto much but i will, and i have a friend who competes in the Swedish Championship that i will ride with when the summer comes. The bike has taken a long time to build with a lot of special fabrication, testing, Engine building so this weekend was actually the first time i could really push it and see if everything worked well, like jetting, engine temps, suspension and brakes.

I like Supermoto because you use these light easy handling bikes, the intensity and technical tracks. I'm no fan of high jumps( i guess it's the age, haha!) but it's a good way of Learning how to ride and Control the bike. 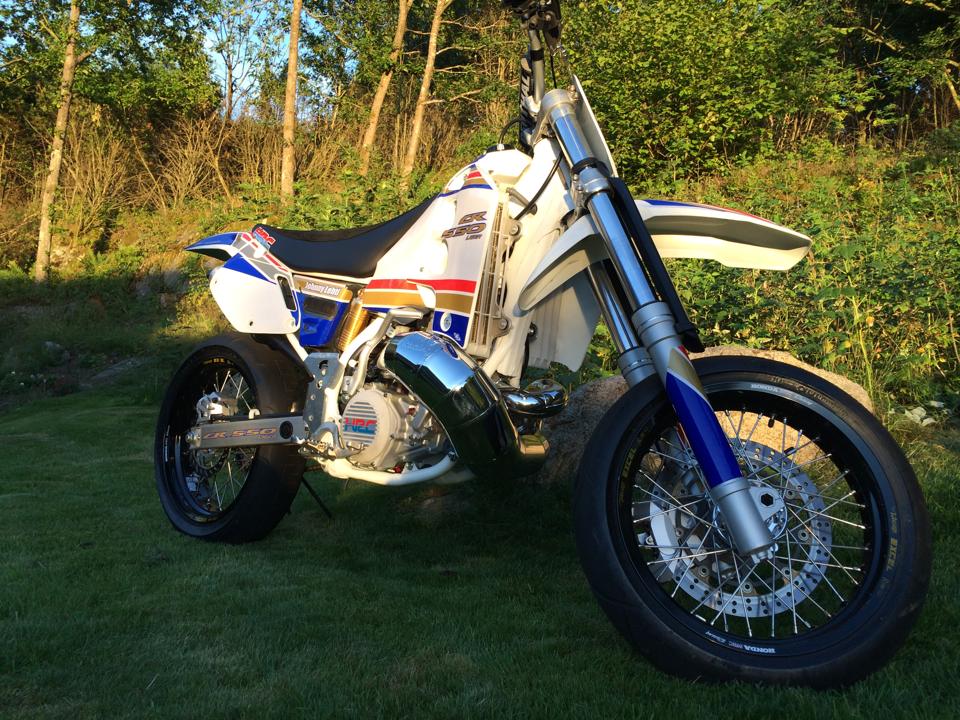 I got the idea of building this bike from one of the Honda CR500 forums on Internet. I was going through the threads there and found a guy who built a big bore drag race quad with a CR500 engine but used a totally different top end purely developed for racing and high horsepower output. That got my head spinning. Could this be possible to do in a CR500 frame? I searched for it and found that noone had done it as it is too complicated. That sounded like something for me to do :)!
I decided to give it a try and bought an old 1990 CR500 that i could use as a base for the build, using the frame, that was registered, and also the engine bottom end. The rest of the parts were sold to a friend. 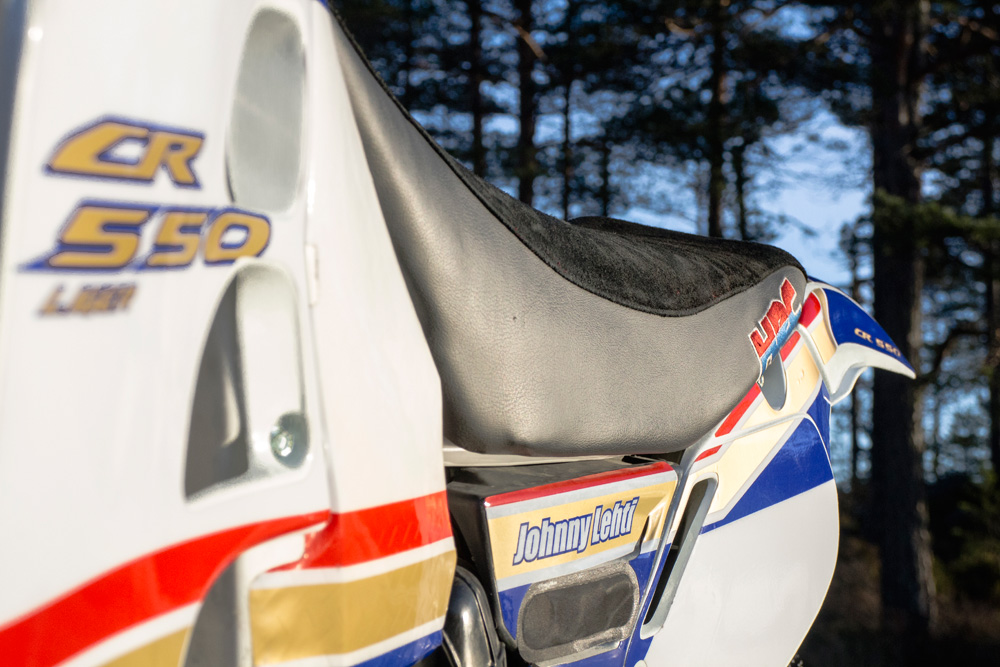 This build was a big longshot as i didn't know if it would work. Would it be possible to get all these parts in the frame? Does the carb fit? Cylinder? radiators and cooling, hoses? Does the fueltank go over this big cylinder head? Does the airbox line up? All this was questions noone had answers to.

I ordered all the parts from a guy in USA that i got a very good contact with. He had built a quad drag racer with a similar engine setup and was a dealer for these special parts i needed. As i found out, he is a very well known twostroke engine tuner with a great reputation. When i talked to him and mentioned my plans we started to discuss what to do, what parts to use, engine setup and a lot more. I got a good trust in him and we put up a plan for what i should use for the engine build.

Once i got the parts i could start to look at what was needed to physically get the Engine into the frame, together with the carb and pipe. Nothing fitted.The cylinder was much larger and hit the front frame rail, the exhaust flange was not possible to get in between the framerails either, the carb is too big so that could not be mounted either. A lot of thinking was needed to see how i should proceed with this. A lot of ideas were dicussed with my American friend and different solutions were thrown back and forth, almost every day.
There was no way to do this without modifying the frame in several areas, move the CDI and coil to make room for the cylinder to slide down on the engine block, make new mounts for those parts, move the radiators up and forward, make room for the radiator hose between the radiators, modify the frame for the big carb, modify the "Y" on the frame to make clearance for the big exhaust flange bla bla bla. As you understand this build was not easy and took a long time. That is probably why this is the only CR500 in the World today, made with this Engine conversion/setup. 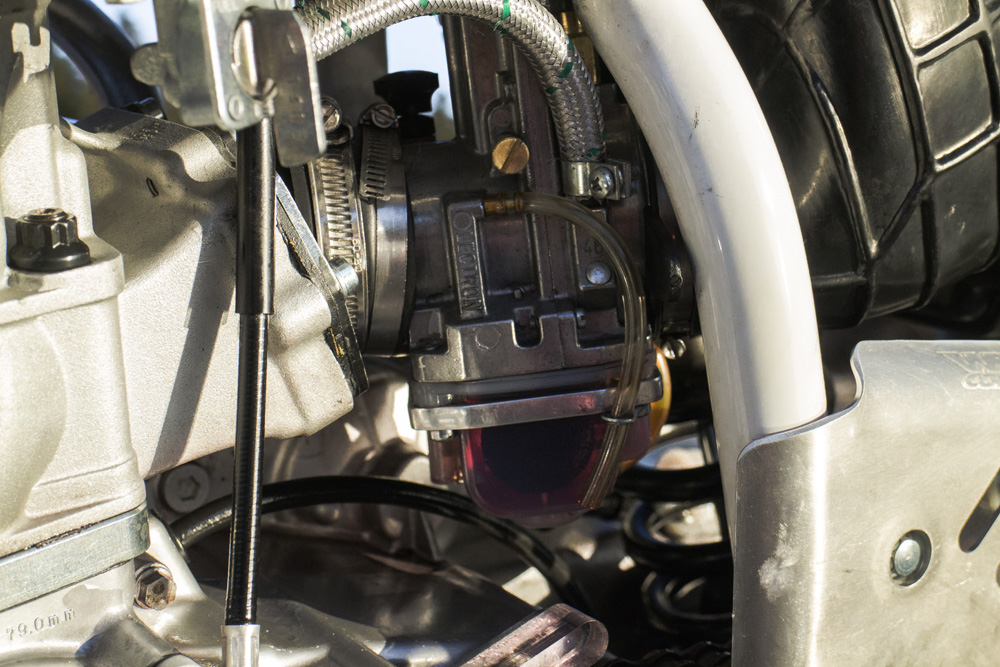 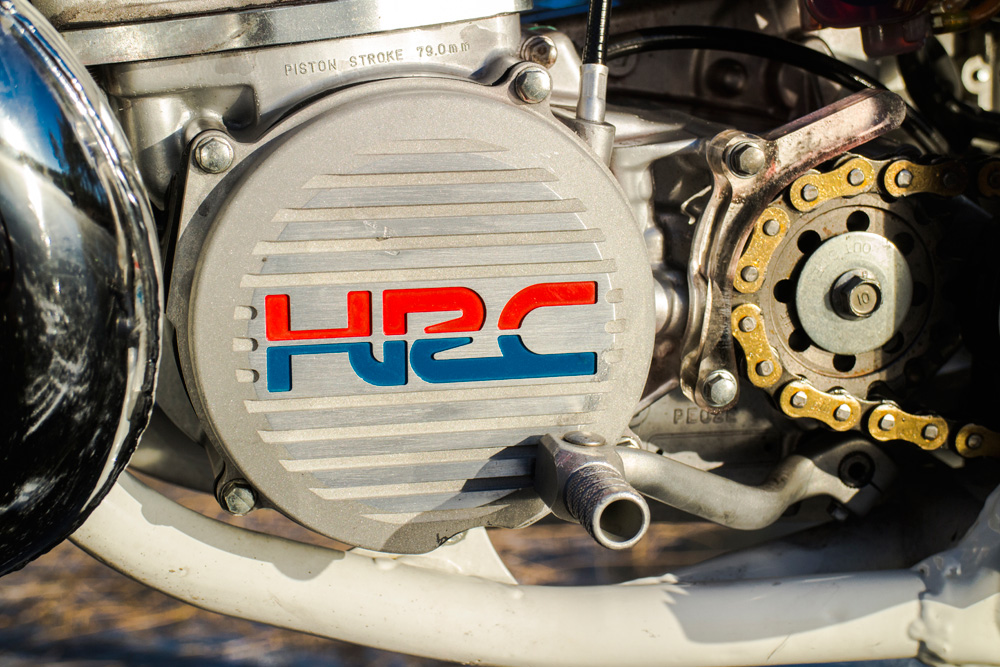 I have 4 Honda CR500's now and one of them was also in Supermoto setup, but as i Went all-in on this Project i sold that bike to a friend of mine.

I don't know if i will build any more Supermoto bike. I am just about to complete another Honda CR500, 1998 model but for now i will keep riding this bike and evaluate it, run the engine for a while and see how well it holds up and just enjoy it. It was an expensive build and i have used a lot of special parts on the bike. 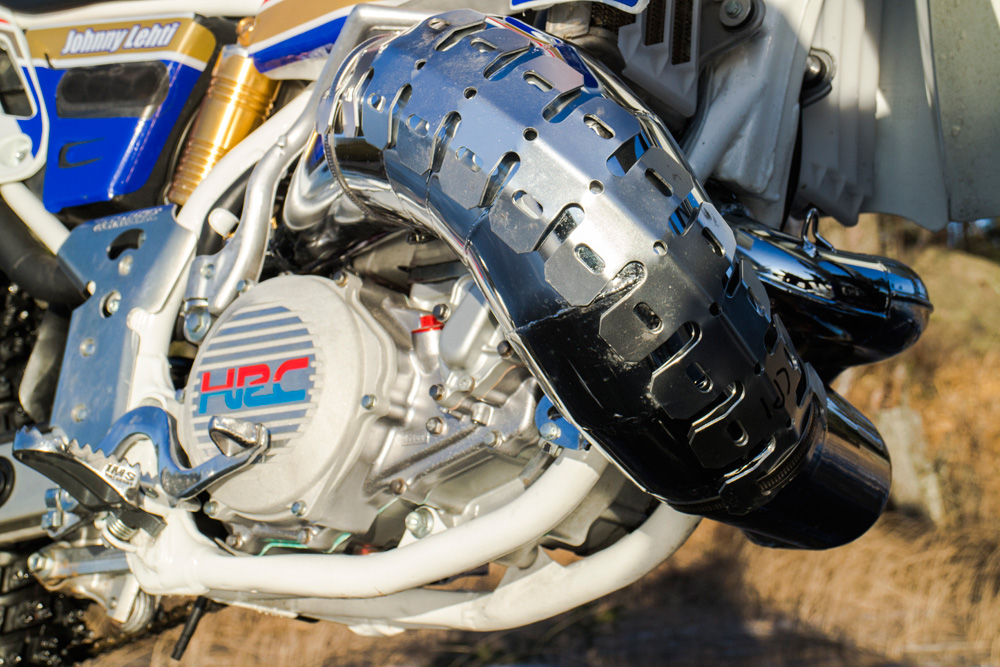 If someone wants to do a build like this, be prepared for a lot of work! You need a good engine builder, very fresh or new parts and a bunch of money. This is not a straight fit with the cylinder and adaptor plate on the bottom end of the engine either, it requires some grinding/machining and some epoxy work to match up the cylinder to the adaptor plate/engine block, tailormade intakeall frame mods needs a good welder/fabricator. All top end parts comes raw so they need to be ported for your type of riding/ specs, cleaned up and nicasiled, choice of carb, tailormade pipe and so on.
When you look at the bike it doesn't look that special actually, but once you start looking closer inbetween, then you see all the mods and how extremely tight it is almost everywhere :). 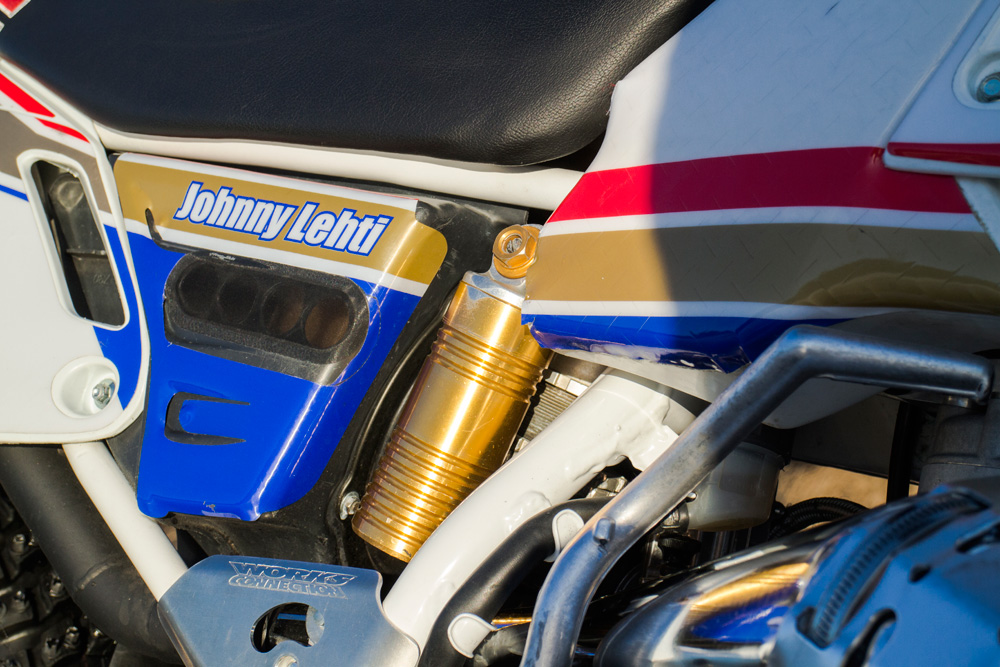 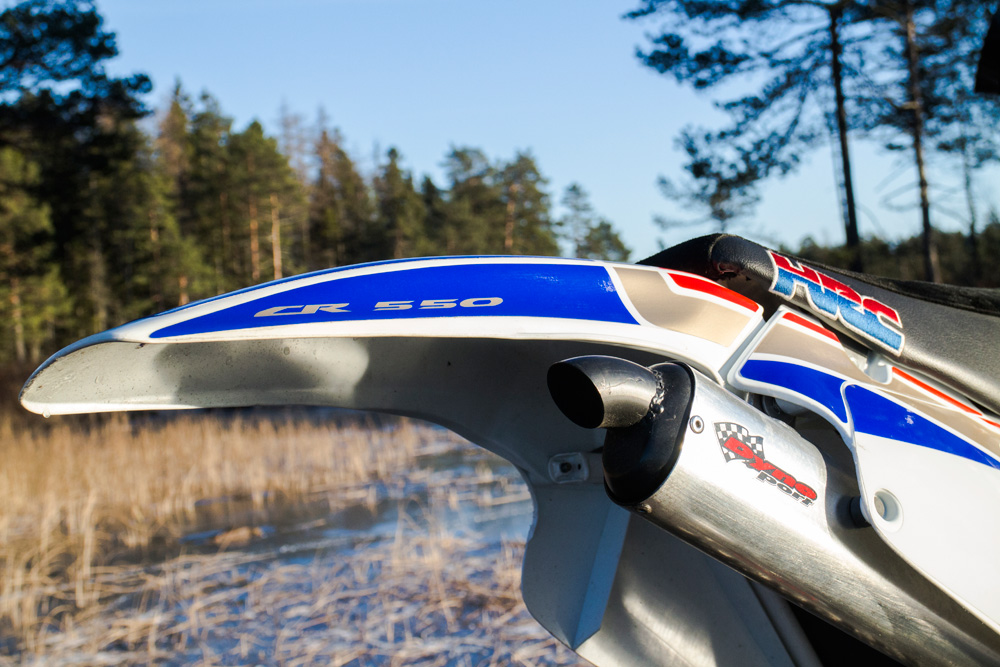 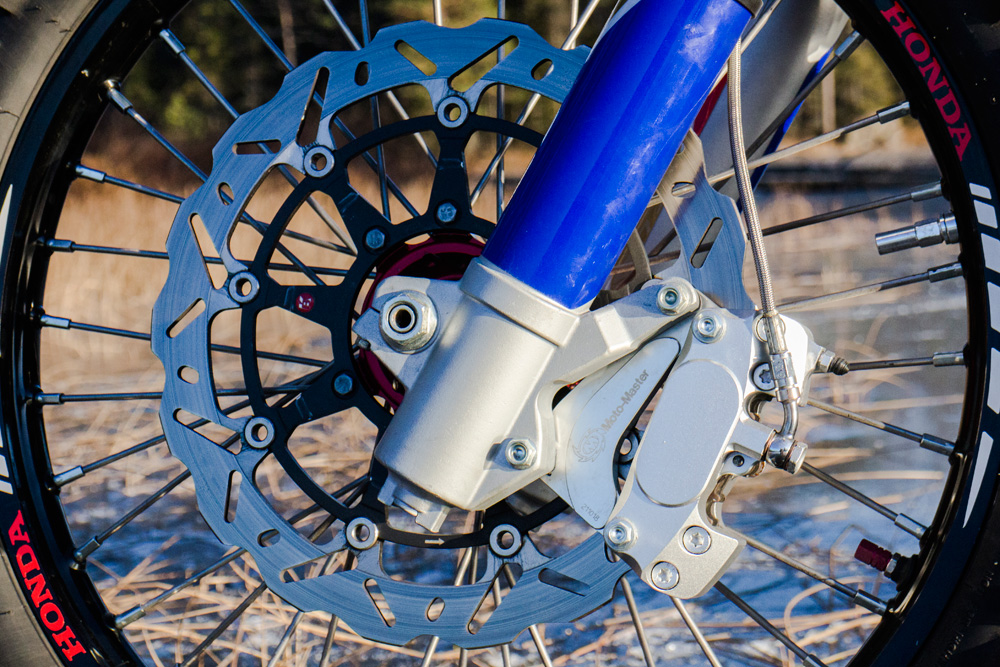 Marzocchi Factory team 500 forks with titanium internals and setup for Supermoto. Compression in one leg, rebound in the other.

Every nut and bolt is either new or nickel plated.

Swingarm is polished and anodized.