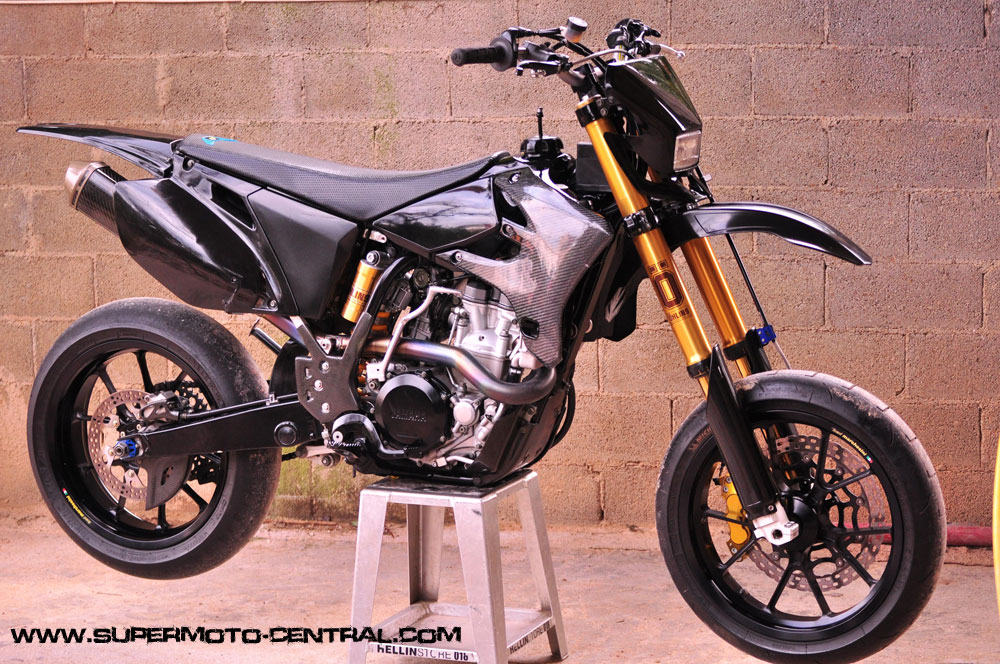 Hi, I work as an editor at a Greek motorcycle magazine but my love for motorcycles began 15 years ago at the age of 14.

My first and still biggest passion is off road riding and racing.

When supermoto became more popular in Greece (sometime about 2000) immediately it seemed very attractive to me. The idea of small, light, single cylinder bikes with street tires was too cool for me to let it go without trying! 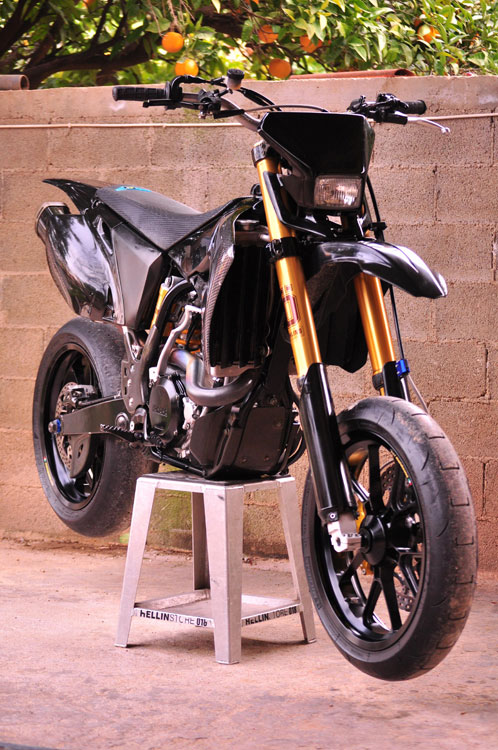 When I bought a brand new Yamaha WR450F 2003 model for enduro riding I had no idea what was going to happen in the future.

One year after I found that riding a smaller bike (250 four stroke) suited better to my riding style, so the WRF stayed in my garage and a YZ250F took it’s place.

That was the time I decided that I should turn my WRF to supermoto form. The first change was simple. 17 inch wheels with Talon hubs and Excel rims, 4 piston MotoMaster caliper and 320mm oversize disk. 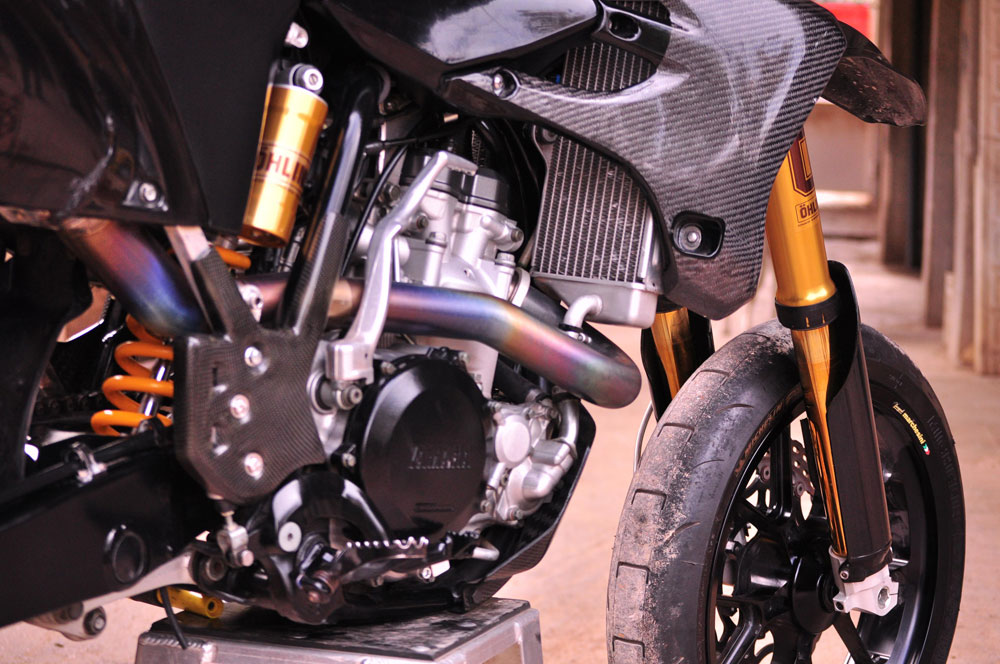 First I powdercoated the frame, swingarm and triple clamps to black color. The stock air filter was changed with a free flow from DNA, and the pipe with an Akrapovic. Immediately I understood that the black color was the one for my bike. So I ordered a black Clarke tank (YZF capacity), changed the seat and all the fenders with black ones. Because I always liked the front mask with the light of my WR, I left it as it was (just painted it). Then I ordered from LighSpeed racing many carbon parts. Skid plate, engine covers, frame covers, rear brake covers, front sprocket covers. Because I wanted a clean look I found an expert in Greece who could make miracles with carbon fiber. So he made the carbon radiator shrouds.

Then I saw the Marchesini wheels. That was! I sold my wheels and bought a pair of Marchs. They look completely exotic! After that I changed the exhaust with a full titanium-carbon system from White Brothers. Replaced the stock exhaust cam with the one from YZF, removed the battery and placed a JD Jetting Kit and took noticeable power gains.

The final step came with the suspension and brakes. I bought a six piston Beringer caliper with a radial 16X18 Brembo master cylinder. An Ohlins supermoto fork and rear suspension (revalved and 10mm lower for supermoto use). By far these were the best money spent. The bike changed completely! Ohlins does magic, period. 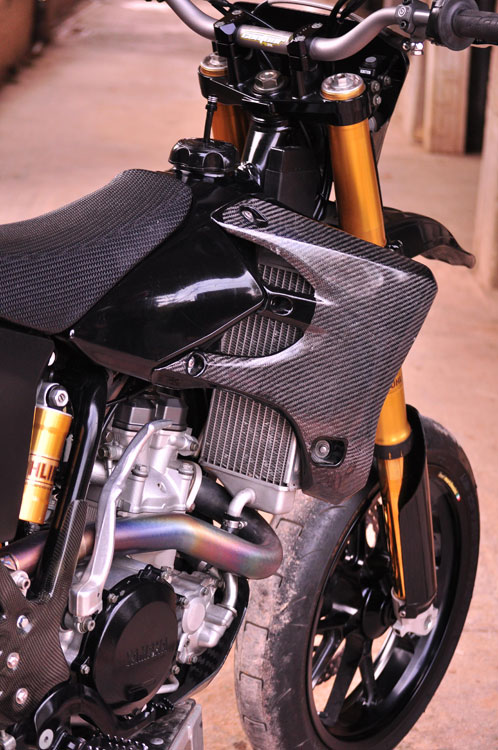 Because the bike was plated I could enjoy it whenever I wanted to the mountain  roads near my house. It was awesome! Sometime around 2006, I decided that I liked this bike so much that I was never going to sell it. And after that I started to build it like I always wanted. The right dream bike for me. 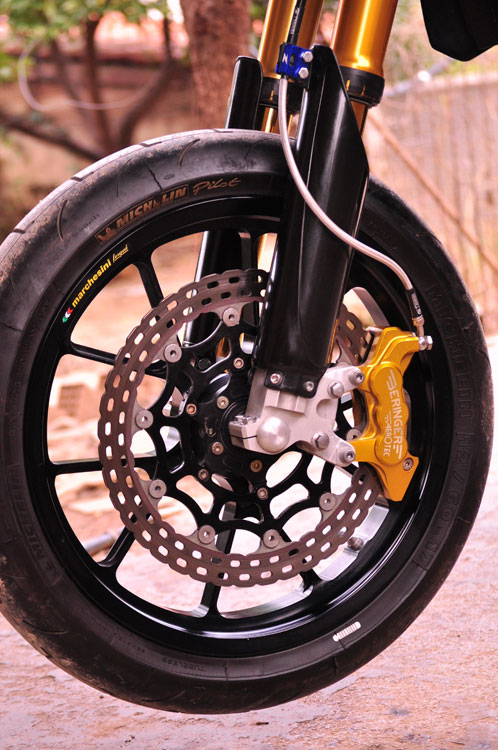 I ride my bike mostly on the road. You know I didn’t build it for racing or tracks. I plan to buy a cheap MX bike and turn it to supermoto form with just what is necessary for the track.

I have still some ideas for my bike. Pro Circuit triple clamps, oversize cylinder-piston, WEB cams. As I found out the project never stops. So if you go for it better be prepared!

Of course I bought most of these stuff (wheels, carbon parts, fork, tank) from USA, so I had to wait.  Generally speaking you have to be very patient if you want to build a supermoto bike on your own. But the result sure is worth trying! Ride safe and enjoy!