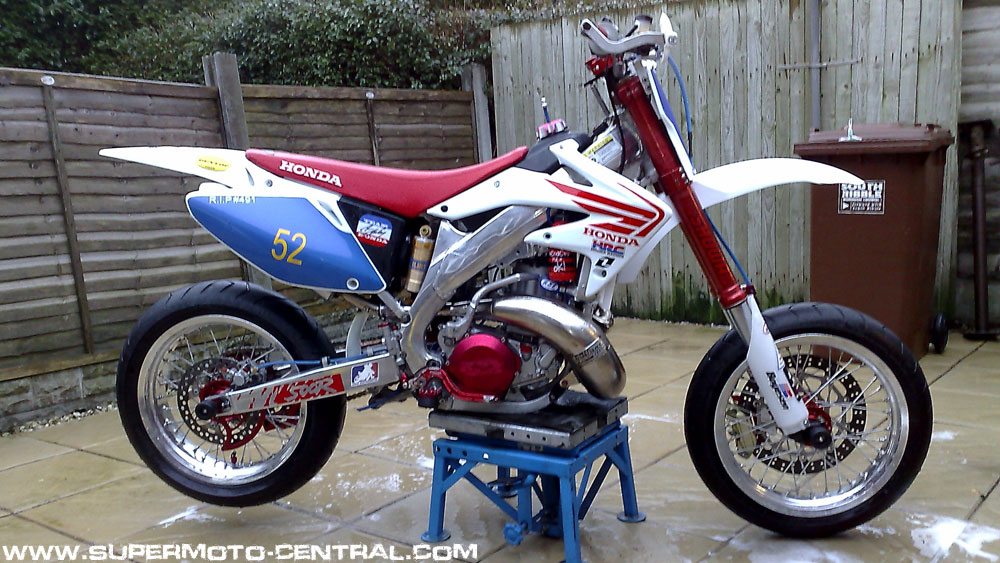 How about a small introduction of yourself to the readers of Supermoto Central?
My name is Patrick and I live in the city of Preston in the UK,. I build mad bikes for fun

How did you get into supermoto and what do you find so great about it?
I raced mx for many years then progressed to road racing. I started racing supermoto in 2002 as it seemed the next logical step 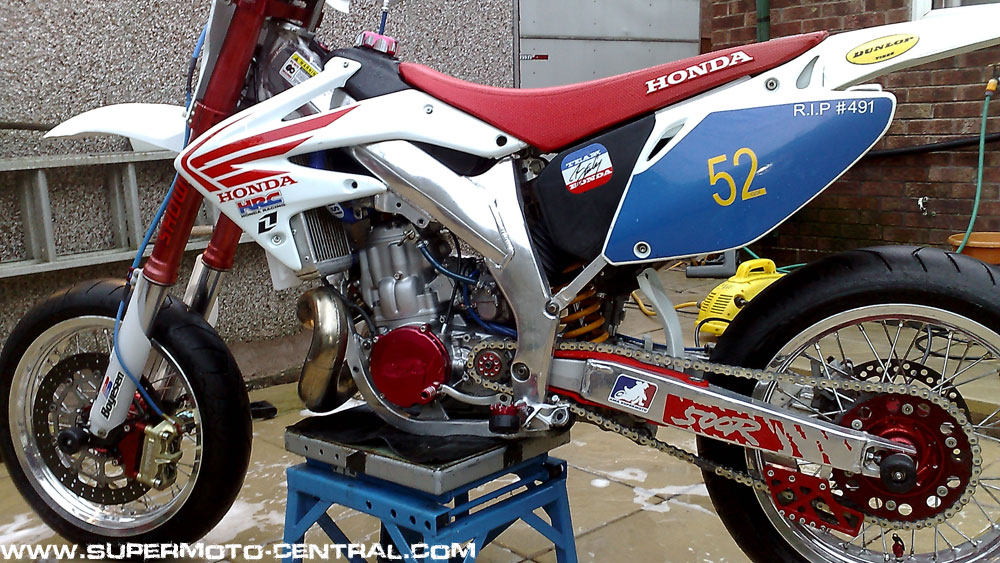 When and how did the idea for this project originated? What was your inspiration?
The bike was inspired by a young guy called Spike who tragically lost his life on his CR500 hybrid. I also like bikes that are a bit mental, Everyone must try a CR500 at least once
What’s was the base for your project?
I bought a 2003 CRF450 and a 1993 Cr500. The CRF had dropped a valve so the logical answer was to put the 500 engine in. 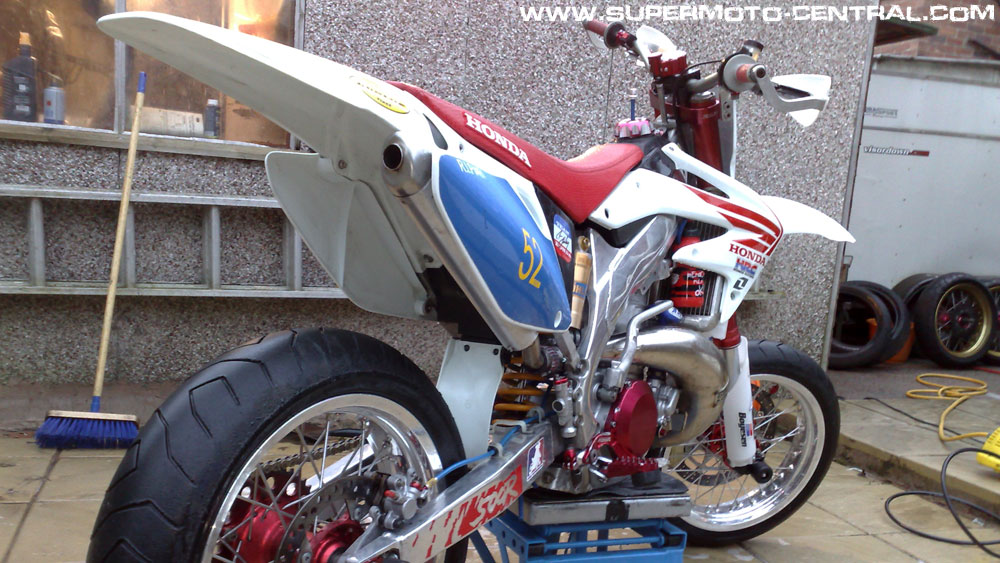 Can you tell us in short how the build went? Did you have any big problems or did it all went smooth?
All 'specials' of this nature have problems, it's all about how you go about fixing them. The frame modifications on this machine have been done by a local specialist who does work for WSB teams.
His alloy fabrication and welding work is fantastic and you will not see any joins in the frame. It looks just like it left the factory that way (thanks to Ben at FABTECH)
Other problems such as fitting later style bodywork, sourcing special parts, making a radial front brake fit etc are all part of the fun of building
What do you use your bike for? Do you ride it on the street or just take it to the track once in a while?
It has been ridden on the street and will soon be road registered. Up till now it has only done 1 sprint hillclimb event and a trackday 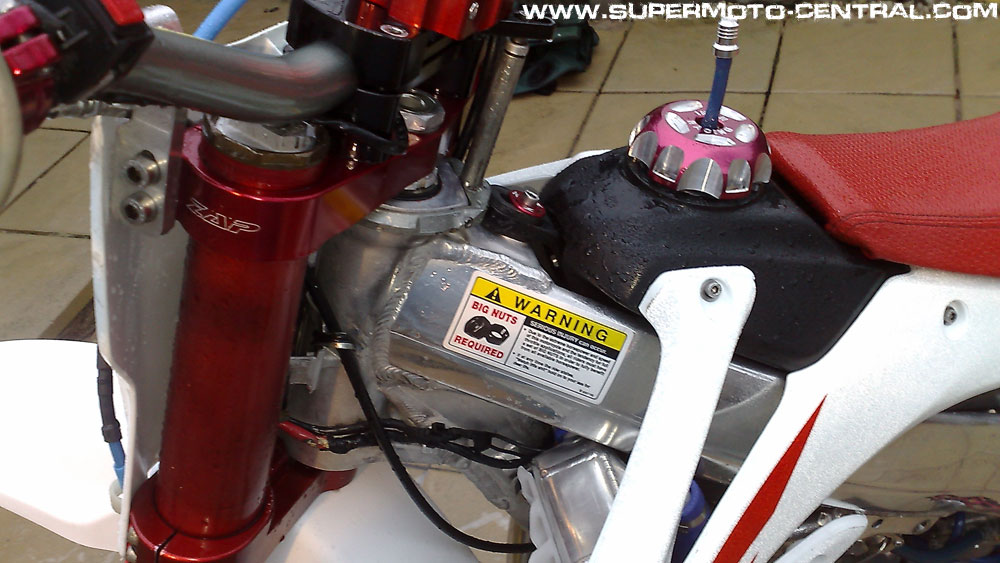 Is this your first supermoto project or did you also build other supermoto bikes?
No, I've built a few. I have many followers all wanting to be like me..people like King Karl, but he just doesn't have my sense of style, money cannot buy class.
Do you have any plans for another supermoto project in the future?
Yes currently in the build process at the moment. 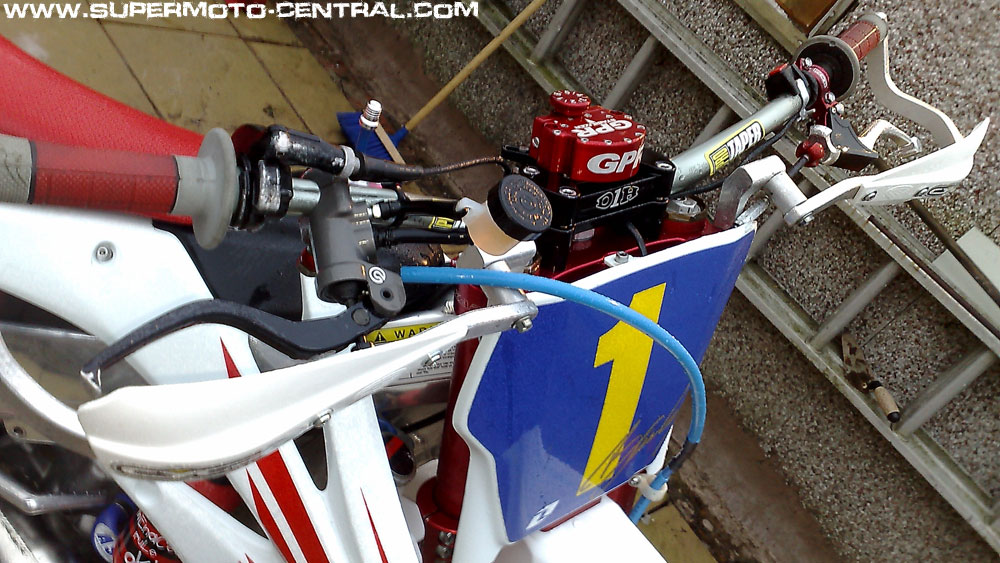