What Husqvarna presents for the very first time this year, it the racing soul of Husqvarna in its urban version: the SM 630.

The most evident gifts of this new motorcycle is the lightness, a key concept of 2010 Husqvarna models, and the easy riding mixed with the power of a 600cc single-cylinder.
Equipped with the new 600cc displacement, the DOHC engine head, injection system assisted by a 45 mm throttle body, the new SM 630 has improved its power of 20% compared to the SM 610. Check out more pics of the new 630 here 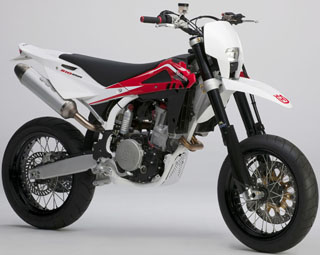 The new 450 and 510 SM, replicas of supermoto world championship bikes, complete the Husqvarna supermotard range alog with the young of the Varese based Company SM 125, available in two color versions.

More pictures of the new models