The first round of the Spanish Supermoto Championship in Albaida was won by Husqvarna rider Francesc Cucharrera. He had a tough round after crashing in the first race but still managed to finish 3rd. In race 2 he finished 2nd and the win in race 3 was enough for the overall victory.

David Gimenez finished 2nd overall with a 3-1-2 score. His teammate Angel Grau finished 3rd overall with a 1-3-3 score. The standing in the championship is the same as the overall result of this round.

In the SMPromesas Valerio Pablo Piedrahita won the overall and the SMMaster35 class was won by Oriola.

The next round of RFME Spanish Supermoto Championship will be on 2 and 3 May with the final location yet to be confirmed.

BPROM announces that the event in Italy, scheduled on 26th April, will be held in Ottobiano, on 7th June will be the new venue of Poznam in Poland, the event originally set to take place in Jesolo (Italy) on 20 September, will now be held in Melk (Austria) and the SMGP of Estonia is cancelled and will not be replaced. 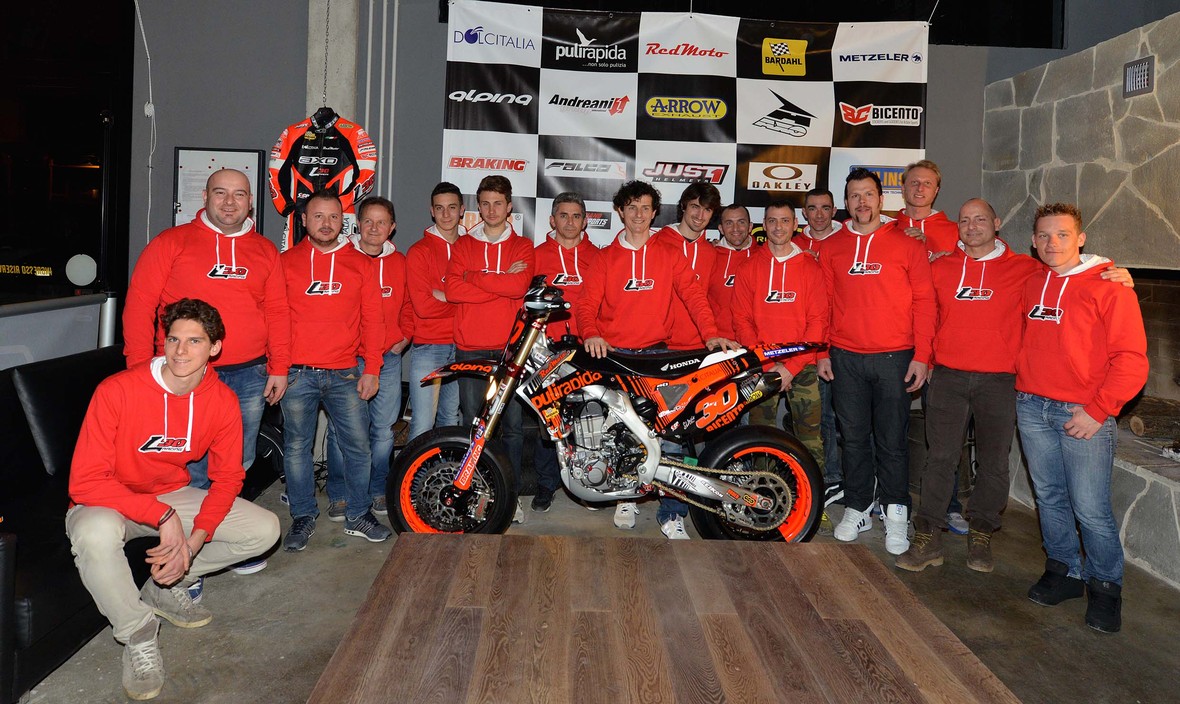 Ivan Lazzarini:
"We will enter in the World, Italian and in the European championship with ten riders, including myself. This is the natural continuation of my challenge, which began in 2013 when I founded my team L30 Racing, where L stands for Lazzarini while 30 is my race number. "

The seven races long German Supermoto Championship starts at Harsewinkel and ends in late September in Stendal (Saxony-Anhalt). To introduce the pilots there is a show-race on March 15 in Saarbrucken.

The top class is the International German Championship S1. Here the best German riders battle against strong competition from other European countries.

The WAR Supermoto Triple Crown was created for the racer who does not want to take three months off in the offseason. Now the riders in Southern California can race all year long.

This years Winter Triple Crown was won by Josh Jackson who won many of the races this season. We are curious about how he will do in the 2015 AMA Supermoto season.

Check out more info about the WAR Supermoto Series

Toni Klem and Devon Vermeulen are trading places for the 2015 season. Toni Klem from Finland will leave team KTM MTR and will ride for the TM Racing Factory team in 2015. Klem will try to win the European Championship title in 2015.

Dutchman Devon Vermeulen will switch from the TM Racing Factory team to the KTM MTR team. Vermeulen had a good start of the 2014 season on the TM but suffered a broken leg which took him out for the rest of the season. In 2015 Vermeulen will compete in the World Championship.

Spanish Supermoto rider Nestor Jorge died today at 39 years of age. The rider from Tenerife has died at his family home in La Laguna because of the consequences of a crash during the World Supermoto round in Greinbach (Austria) in 2008.

During that round he crashed hard and suffered a heavy head injury.

RIP Nestor Jorge. We want to wish the family all the best during these hard times.

Hermunen and Biaggi team up for 2015 season

Mauno Hermunen will ride the 2015 World Supermoto Championship in a new team started by Max Biaggi. He will be the only rider in the team.

He will still be using the TM SMX450 maintained by the TM Factory mechanics like he did the last few years.

Iddon, Biaggi and Hermunen winners at the 2014 Sic Supermoto Day

After Saturday where the champions fought hard in the

(Iddon won ahead of Dovizioso and Biaggi), the second day of the Sic Supermoto Day 2014 was about the Endurance Race. An 'All Stars' team challenge lasting 58 rounds (in honor of the number of Simoncelli).

The proceeds of the two days of Sic Supermoto Day 2014 were entirely donated to charity: Saturdays proceeds went to the Tudisco foundation, one Sunday to the Simoncelli foundation, and 20% will go to the pilots of less fortunate families, including the family Romboni.

Check out the photo gallery and full results here