No World Supermoto round at Mettet

Club RUMESM announced that they will not organize a Supermoto World Championship round at Mettet in 2014. This round was planned during the Super Biker Mettet on 3, 4 and 5 October 2014.

The organization wants to focus on the further development of the Super Biker with an emphasis on show and spectacle.

He will compete on a Honda in the British Supermoto Championship together with his DCR/Nameplate Services teammate Davey Todd.

Speedweek.com announced that the German World Supermoto GP of St Wendel will return to the calendar for 2014.

The German GP of St Wendel was last held back in 2010 and was a big success. The races in St Wendel always drew big crowds.

But because of financial difficulties the organisation was not able to organize this GP again in the following years.

They want to make the GP a three day event together with the German Supermoto Championship.

Read all the details at Speedweek.com 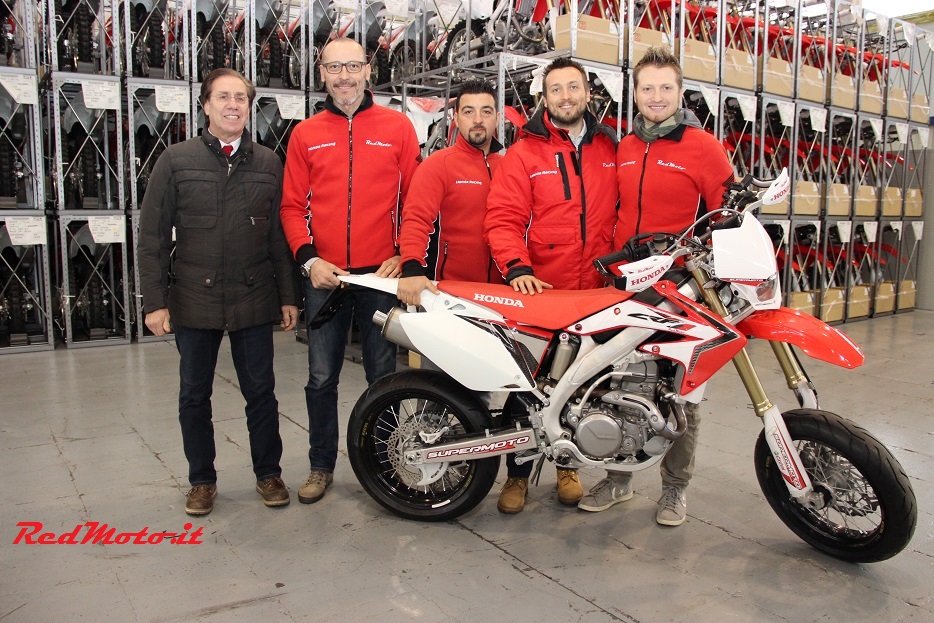 RedMoto, partner of Honda Italy, signed a partnership with Team Assomotor. Italian riders Christian Ravaglia and Fabrizio Bartolini will ride in the World Championship and Italian Supermoto Championship this season.

RedMoto Srl is the distributor of the Honda CRF motocross, enduro, supermoto and Montesa Trial bikes in Italy.

"In order to develop a 360-degree view of our company, this is certainly a fundamental step for the growth in Supermoto - says Michael Berera, Redmoto Sales & Marketing Manager - collaboration with Team Assomotor allows us to work closely with one of the most important teams in the world. This agreement will improve the image of the RedMoto products, further enhancing the quality of our bikes. The direct relationship with the team is an indispensable source to understand even better what to offer to fans and to anticipate the demands of the customer."

"I can only express satisfaction with this collaboration and I'm really happy to be able to continue my work with Honda - adds Assomotor team manager Alfredo Bevilacqua - RedMoto gave us the opportunity to represent the winged brand in the 2014 Supermoto season, a trust that proves that our work is appreciated and confirms the validity of the results gained over the years. "

Mauno Hermunen proved that he is not the current world champion by chance and did well in the doubleheader that opened the 2014 season of the Supermoto Arena Championship in Penha, Brazil last weekend. The Finn, who was invitated by the organizers, took the pole position and secured the victory in both races.

Hermunen commented: "It was very nice to race in Brazil, with the grandstands full and lots of public support. No mistakes in both races and I won."

Multiple Brazilian Champion Rafael Fonseca finished 2nd overall with a 3rd and 2nd place. Petr Vorlicek took the third step of the podium with a 2nd and 3rd place.

Sunday December 29th the WAR Supermoto Series had its first event taking place at Adams Motorsports Park in Riverside, California. The track was packed with motard bikes and the racers were excited for the new Southern California race series to launch.

From the first practice it was obvious that Intents Racing’s Joey Pascarella was the man to beat, but he would have several crashes that left him vulnerable to the rest of the field. One of which came during the Open Pro heat race, Joey remounted and finished third giving him a front row start for the main.

During the Open Pro main Joey would get out front early and open up a sizable lead. Jeremy Toye was determined to get to the front and would come from ninth place starting spot to move into second place on lap five of the twelve lap main event, he would use the last seven laps to gain ground on Pascarella, but could not get the job done. Pascarella kept it on two wheels winning over Toye, James McNeill, Uri Thatcher, and Lance Garza who rounded out the top five.

833 Racing Team is a new team from the Czech Republic. They will ride with the new 2014 Husqvarna's for the 2014 season.

Happy Holidays to all fans and followers!