Under sunny skies and in front of a packed auditorium the final SMGP and SM2 European Championship did not disappoint as both Titles went right down to the wire, being decided in the final laps of the final races of the season.

Thomas Chareyere was crowned S1 World Champion for the third time on his Factory TM as Asseri Kingelin nervously held on to be crowned SM2 European champion on his Fast Wheels Aprilia.

The American Motorcyclist Association is pleased to announce the U.S. team that will compete at the FIM (Fédération Internationale de Motocylisme) Supermoto of Nations in Cremona, Italy, Oct. 12. The 2014 team will include Gage McAllister, Monte Frank and Johnny Lewis.

Brandon Ward and Eric Stump are alternates and will travel with the team to Cremona.

"Supermoto is a thrilling sport, and we're excited for its resurgence in America," said AMA Track Racing Manager Ken Saillant. "Sending riders to compete in the world team championship is another important part of accelerating the growth of U.S. Supermoto."

New event: Commonwealth Supermoto Masters on the Isle of Man 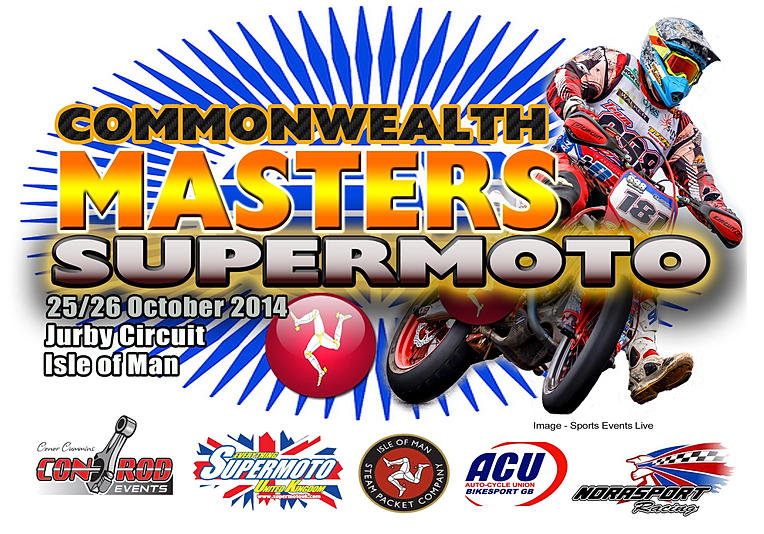 Conrod Events, Norasport and the ACU have come together with Supermoto UK to present one of the top events of the year on the UK’s supermoto calendar. The Commonwealth Supermoto Masters

Taking place on this iconic Isle of Man the motorsport mecca for both two and four wheel action this two day event brings riders from all corners of the UK and beyond to battle it out for titles in a number of classes.

The inaugural running of this event has raised plenty of attention from the two wheel racing community and with the number of interested riders increasing by the day we are sure this is going to prove a popular event.

Running at the Jurby circuit plans and preparations have been underway for some months and as we enter into the closer stages of the running of the event Jurby Circuit is busy placing in an off road section to provide a challenging and demanding circuit for all levels of ability.

Supermoto of Nations to be held in Italy

BPROM announces that the 2014 FIM Supermoto of Nations, scheduled on 12 October, will be held at Cremona, Italy, San Martino del Lago Circuit, the same venue that hosted with great success the SMGP of Italy on July.

The East Coast based company - Supermoto East Coast (known as SMEC) - was formed to organize and promote Supermoto events at all levels starting with a local series to a National Pro series. SMEC has dedicated themselves to provide racers with a professional racing environment and the highest level of competition over the last one and a half seasons since SMEC was created. Having extensive knowledge of the European SuperMoto market, Co-founders Marco Pedde and Jay Kliger have made it their mission to build a similar structure and race atmosphere here in North America.

SMEC is proud to announce that the current 2014 AMA Supermoto East Coast Championship Series will now continue as the "FIM North America Supermoto Championship" series for the remainder of the season and for years to come. FIM-NA Supermoto is now associated with the surrounding sanctioning bodies: American Motorcycle Association (AMA),Canadian Motorcycle Association (CMA) Supermoto Quebec and Supermoto Ontario. With the support of these organizations FIM-NA Supermoto will be able to provide Supermoto racing events across North America for the remainder of 2014 and into 2015, as well as for years to come.

Supermoto fans lined the circuit at Castelletto di Branduzzo today as they witnessed some crazy goings-on at round five of the FIM Supermoto World Championship and SM2 European Championship, as they witnessed Mauno Hermunen regain control of the S1 Championship, Asseri Kinngelin assert his authority in SM2 and a little bit of history being made as Ivan Lazzarini stood on the top step of the podium.

Read more: Hermunen back on top in S1 and “The King” marches on in SM2

But when the chequered flag fell, it was Thomas Chareyre who gained ground on his rivals in S1, as Asseri is the new King’ of SM2.