Sylvain Bidart is the new French Supermoto Champion of 2012. The Luc 1 Honda rider has won the latest round of the season on the Island of La Reunion.

Bidart takes the overall win with 2 race wins and a 3rd place. 2nd overall was for Aurelien Grelier with a 2-4-2 score.

David Baffeleuf (Honda) finished 4th and 5th in the first two races and ended the season well with a win in race 3.

Austrian Supermoto rider Rudi Bauer will be riding for Team Bauerschmidt KTM in the 2013 German Supermoto Championship. The Austrian rider finished 2nd in the Austrian Open Championship in 2012.
Team Bauerschmidt KTM will have a very strong team next year with Bernd Hiemer and Rudi Bauer. Pavel Kejmar is leaving the team but we will have an announcement about that soon.

After four races Trakarn Thangton from Thailand is leading the Maxasia Asia Supermoto Championship. He is closely followed by Ryuta Kaneko and Susumu Mitoma from Japan.
In the Nations Championship Japan has a small lead over Thailand and Singapore. Check out the full results of the first round here

The Maxasia Asia Supermoto Championship is a new championship held in Thailand and Malaysia.
Riders from several different Asian countries will battle aboard Kawasaki KX450F's for the title. Riders will fight for their country in a Nations championship and an individual Riders championship.
You can find more information about the championship here A new and important GP will be added to the 2013 FIM Supermoto World Championship calendar.

Local authorities are in agreement with Danilo Boccadolce(Youthstream Events CEO) and have planned the Estonia – Kuressaare GP of Supermoto.

The circuit will be build on the Kuressaare Airport and it will be a track that is about 1.400 metres long with 250 metres of off road.

Rumors are also floating around that Youthstream is in talks with the Circuit of Mettet to organize a World Supermoto round on the track where the yearly Superbiker Mettet is held.

Nothing final yet, we will keep you updated.

Valentino Rossi will ride at the Sic Supermoto Day 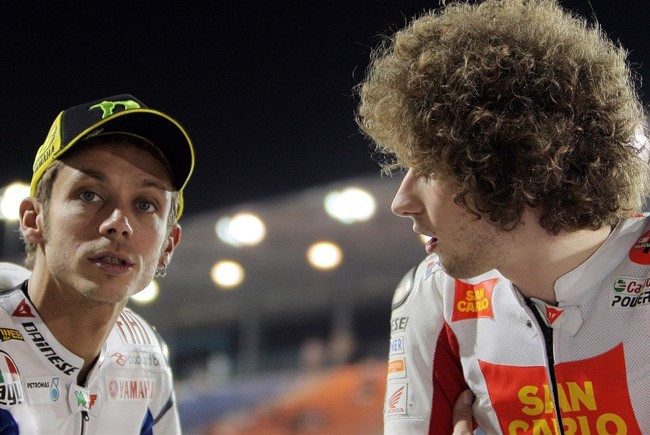 All proceeds made by the event will go to the Marco Simoncelli foundation.

The formula of the show is an interesting one: a team formed by a Supermoto rider and a MotoGP or SBK or Motocross specialist, will alternate in an endurance race lasting 58 laps.

Big names from roadracing will also compete next to Rossi: Biaggi, Dovizioso, Fabrizio, Pasini, Iannone and Scassa are some of the familiar riders.

After three years Goldentyre is leaving the World Supermoto Championship as a sole tyre supplier.

There where complaints about Goldentyres at the beginning of their contract in 2010 but they improved their tyres a lot the last few years. But the negative image did not improve.

Now Goldentyre wants to prove that they can compete with the top Supermoto tyre brands by opening up the Championship for other manufacturers in 2013 .

For more details checkout the full article by Markus Niegtsch at Speedweek.ch

The last race of the Spanish Supermoto Championship was held in Albaida Spain, Valencia.
In all the classes at least two pilots have the option to take the title. In SMOpen Francesc Cucharrera and Israel Escalera were the top contenders but the big battle that everyone expected did not take place.
Israel Escalera was injured in the Supermoto of Nations at Portimao on 6 October and did not compete in the race. Israel will undergo surgery in the coming weeks. Cucharrera was already champion even before the races were held. Yet the KTM rider took the victory in both races proving why he is the Champion of Spain.
Full race report

The 2013 FIM Supermoto World Championship calendar has been announced. Click read more for the full calendar: