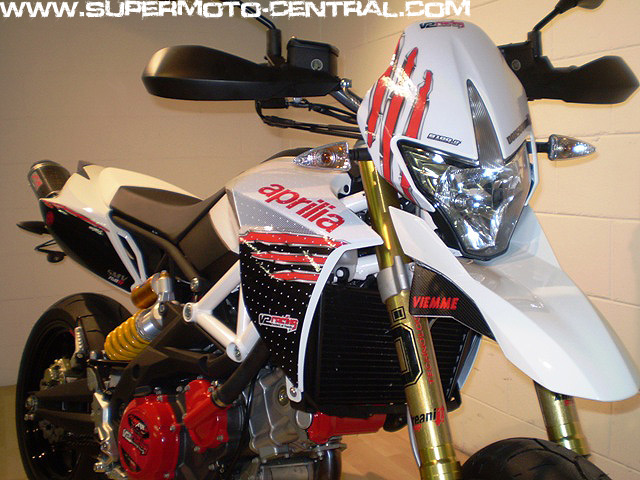 Another special creation from the Italian V2 Racing shop. After the beautiful V2 Racing Dorsoduro RR they created the Dorsoduro R. The Dorsoduro R is a street legal bike with some very trick goodies that bring the weight down by 12kg (27lbs) and increase the performance by 6hp. V2 Racing will offer this model in a limited series of 50 bikes. Price is 13,900 euro.

Supermoto Central is proud to announce a new partner: Wave Racing. Wave Racing is a company from Italy specializing in Racing Accessoires for Supermoto, Cross, Enduro, ATV, Street bikes and Jetski's. They offer a wide range of Carbon, Engine tuning and billet parts for all kinds of brands. They also have lots of specialized Supermoto parts like Slipper clutches, Triples, Sliders and more. Go visit the Wave Racing website here

Great day for Husqvarna today as the manufacturer presented its Factory Teams for the 2009 season at the Roadhouse in Buguggiate, a town close to the factory’s base Varese (Italy). The event took off after the welcome of Husqvarna Motorcycles Srl President Rainer Thoma and the presentation of the racing activities by Husqvarna Racing Coordinator Martino Bianchi.

After the announcement 2 weeks ago of the Aprilia Rip it team pulling out of AMA Supermoto, team owner Darryl Atkins explains why the team decided to pull out and why he is ending his Supermoto career. He also announces they are working on getting 2007 Unlimited (S2) Champion Ben Carlson into the S2 World Championship on an Aprilia. Which is great news! We need more Americans in the World Supermoto championship.