After securing pole position for the main race Thomas CHAREYRE wasted no time in putting it to good use in race one as he grabbed the holeshot and rode to a convincing victory, leading every one of the fourteen laps on offer. Behind him were equally impressive rides for Pavel KEJMAR and Lukas HOELLBACHER who raced to second and third positions respectively. Despite starting in fourth position, Andrea OCCHINI wasn’t able to hold off the challenge from Ivan LAZZARINI and the Honda rider eventually was able to ease by his fellow Italian at the halfway stage of the race where he would go on to claim fourth.
But it was a tough opening race though for Mauno HERMUNEN after suffering a poor start, he could only make one pass during the entire race to move from sixth to fifth, losing valuable points to Chareyre in the process.

After his disappointment in race one Mauno Hermunen was fired up for race two and his holeshot was the perfect way to get things started in race two. But the confidence of Thomas Chareyre was running at an all-time high and the Finn was displaced by the second lap after Hermunen made a small mistake which allowed Chareyere and Pavel Kejmar to sneak by.
As Hermunen tried to re-take second from Kejmar, the Czech rider made his own mistake and fell back to fourth behind Hermunen and Ivan Lazzarini and for the remaining second half of the race the top four positions remained unchanged. A late charge from Devon VERMEULEN saw him climb to fifth with less than a handful of laps to go. But the ride of the race belonged to Lukas HOELLBACHER who after falling on Lap one put in a strong performance to climb from fifteenth to take sixth with two laps to go in what can be safely described as damage limitation to his championship chances.
Thomas Chareyre stood victorious on the top step of the podium flanked by Pavel Kejmar and Mauno Hermunen and now leads the championship by two points from the Finn. 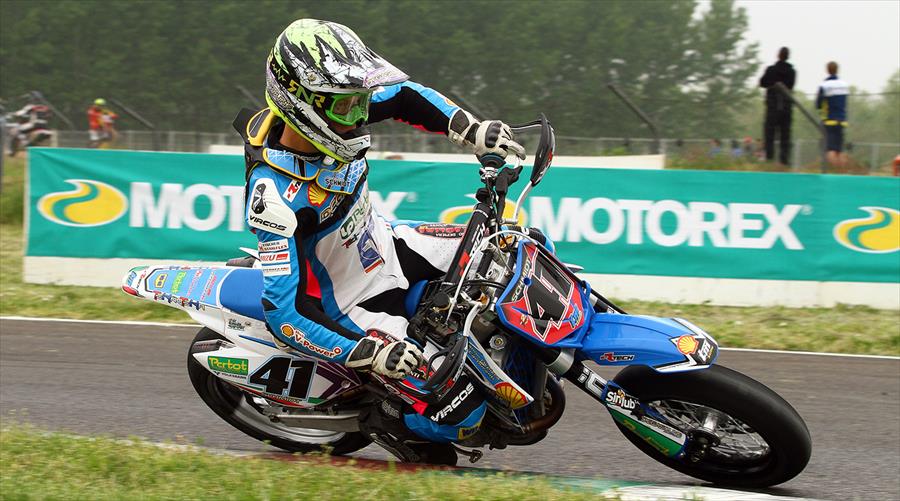 Before the start of the season you would have been hard pressed to pick a potential winner in S2, but after the first round of the European Championship in Spain, and after his dominant performance in timed training, there was no mistaking the intent of Marc REINER SCHMIDT who once again proved why he will be the man to beat in 2015. He took full advantage of his pole position to take the holeshot before pulling away from his rivals for his third race win of the season.

Behind him Yuri GUARDALA tried to keep the German in his sights but the pace was just too hot for the Italian who was happy to settle for second. Third belonged to Giovanni BUSSEI who’s pass on Fabrizio BARTOLINI saw him take his first moto podium in a long time.
With Bussei into third, Bartolini started to fade backwards and eventually dropped back to seventh after being overtaken by Diego MONTICELLI, Mattia MARTELLA and Petr VORLICEK who placed fourth, fifth and sixth respectively.

Race two was much of the same for the race one winner Marc REINER SCHMIDT. As he took off for an early lead he was soon almost ten seconds clear with ten laps to go, this time though it was Toni KLEM who tried to give chase to the German, but unfortunately for the FINN he found just as Guardala did in race one that it’s going to take something special to solve a problem like Reiner Schmidt. Klem would eventually settle for second after starting fifth in what was a good positive performance.

It was a tough second race for Yuri Guardala though and after starting in second the Italian made a mistake on Lap three and fell back third briefly and then fourth. Eventually he would find himself falling again to tenth, and on the final lap went missing altogether.
Mattia MARTELLA put in a solid performance and after starting seventh on lap one took just four laps to find third which is where he would remain until the end of the race. Vorlicek and Bussei rounded out the top five positions.
The overall victory belonged to Marc REINER SCHMIDT with Mattia Martella taking second ahead of Giovanni Bussei.

The best moments of the second Grand Prix of the 2015 FIM Supermoto World Championship will be available across the board in high definition, and is also globally available to view on S1GP Channel on YouTube
Click HERE for the complete list of countries and cooperating broadcasting networks, viewing times can be viewed by clicking on the logo of your chosen broadcasting network.

Photos of the whole Grand Prix are available HERE

In the photo: S1GP podium